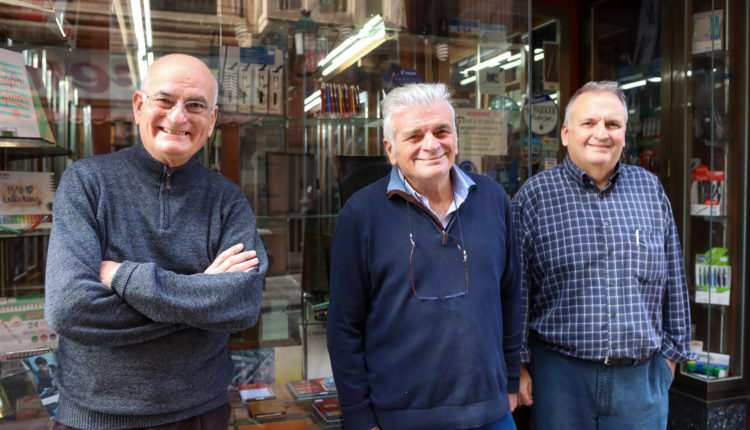 “I could feel the soul of the business—Its alma (soul).” I said to brothers Eutimio and Victor, as I stood inside their tienda (store), located a seconds walk from the main rambla (avenue) in the City of Alicante, Spain.

It was this spirit that pulled me into their paper and supplies store, Papelería Eutimio, the first time. Papelería, in Spanish, is a tienda (store) that sells paper and office supplies. I would go on to buy 100 sheets of paper at two different stocks.

I had returned to the store to write this article on the business—We met during a morning because the business was closed during siesta in the afternoons.

“The [items in the window] changed but nothing else,” Eutimio explained while showing a canvas-mounted landscape photograph of the tienda hung on the wall.

Papelería Eutimio was started in 1935 by Eutimio Fernández Duque. He worked at another company before setting out to start the store. Presently, family members in the business include Eutimio I’s grandsons Eutimio (the III), Victor and Francisco Fernández Pardo.

Francisco brought out an original flyer that his grandfather produced and distributed locally in 1935—the year the store opened—to create awareness for the new venture.

After Eutimio’s reign, the business was passed onto the brothers’ father, Eutimio Fernández Ripoll (the II).

“When I was young I used to come every Thursday,” Eutimio III reminisced. “And after eating, I used to come down here [to the store] and play. I liked papers a lot.”

As it turned out, Eutimio I and his family lived in the residential unit directly above the store. Today, the unit is still in the family, being occupied by the brothers’ sister, Isabel.

Today, the business has a few staff but at one point had nine. “In the 2008 crisis it was very noticeable…many businesses closed… many businesses like this one in Alicante.” Eutimio shared. He went on to cite other factors that have made the business landscape more complex and competitive.

When asked how Papelería Eutimio survived the 2008 period, he explained that many of the other companies had mainly employees. In their case, the company was able to continue to operate primarily with the three brothers—and they did what they could, including supporting each other, to see that period through.

There are adult children amongst the brothers, but none are in the business. Francisco and Eutimio weren’t optimistic about the business’ continuation past the three brothers’ careers.

In the course of a 45-minute visit, several customers paid patronage, all appearing satisfied, and all presumably repeat customers. It’s these relationships that have undoubtedly assisted the company well into its third generation.

Slightly off the Rambla Méndez Núñez in the City of Alicante, Spain, exists Papelería Eutimio, a soulful third-generation business that has serviced the Spanish City of Alicante since 1935.